Wikipedia describes ‘baby boomers’ as people born between the years 1946 and 1964, during the Post–World War II baby boom. Widely referenced in a cultural context, baby boomers are associated with a redefinition of traditional values. The most affluent and active generation up to that time, baby boomers were the first to grow up genuinely expecting the world to improve with time.

A unique generation, baby boomers are vastly different from preceding periods in terms of their ingenuous rhetoric. Civil rights, women’s rights, LGBT rights, the peace movement, and the green movement all came into being with the boomer generation. Boomers are also noted for their remarkable advances in the arts and entertainment; science; law; politics; public service; sports; the military and technology. In the 1960s, as millions of Americans became teenagers and young adults, boomers created a progressive, initially rebellious “counter culture” that championed change and new ideas. Of course, Madison Avenue, never allowing a huge market to go to waste, disingenuously exploited the “counter culture” with its own term, “the generation gap”.

2014 marks an important shift in American culture, as the last of the boomer generation turns age 50 by year’s end. To commemorate this historic moment, American documentary filmmaker and photographer Timothy Greenfield-Sanders presents The Boomer List film, a wide ranging look at 19 iconic figures—one born in each of the boomer years, 1946-1964. In October 2014, the documentary comes to life on PBS’ American Masters series. The celebration will also include a companion book and a major exhibition in Washington, D.C. at the Newseum of Greenfield-Sanders’ large-format portraits of the film’s nineteen subjects.

“Most everything about how we live today is a product of this influential generation,” says Timothy Greenfield-Sanders. “The film and exhibit will serve to capture boomers’ dynamic spirit through a careful selection of notable ‘American Masters, who had a profound effect on our world.”  Continuing in the style of his award winning series that included The Black List, The Latino List and The Out List, Greenfield-Sanders again brings his unique docu/portrait style to life with direct to camera “talking portraits” interviews. These tightly edited monologues exclude the interviewer and focus strictly on the subject, creating a powerful and emotional viewing experience.

Eve Ensler, Billy Joel, Deepak Chopra, Amy Tan, Tommy Hilfiger, Ellen Ochoa, Erin Brockovich, Steve Wozniak, and Maria Shriver, are just some of the men, women, African Americans, Latinos and Asian “boomers” who contributed to the project. Their exceptional careers, struggles and sense of identity shape for us this extraordinary generation, its history and its monumental achievements. 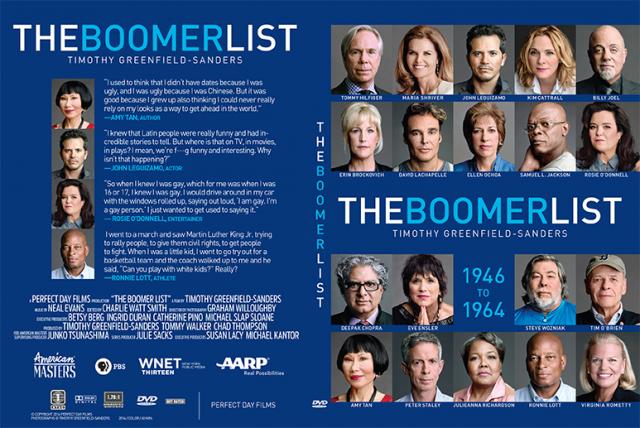