We are at an evolutionary moment, that pushes us to confront how we define ourselves and know one another. We’ve outgrown categories and definitions that once held us. Man, woman, girl, boy, masculine, feminine, no longer reflect us all. We’ve made way for something new – cis and trans, nonbinary and genderqueer, the singular they.

Our culture has arrived at peak trans-ness: We’ve seen an Olympian sprint away from her heroic past to declare herself anew…a black child from Mobile, Alabama, reach unimaginable stardom on our screens…an Army sergeant break rank to defend his right to serve our country openly.

These stories of triumph do not outweigh the tragedy facing many trans Americans……who struggle with limited access to shelter, healthcare, education and employment while resisting the inevitable statistics that find our communities in poverty, susceptible to HIV, criminalization, suicide and violence.

Despite the vitriol, despite the backlash, despite the discriminatory laws, we fight to be seen as we see our selves and live our truth without compromise. We are a constellation of experiences expressions, definitions and identities.

These living portraits are telescopes. One person sharing themselves, trusting us to see them feel them know them.

They are so close – so close that we see ourselves: the kid pretending to be Perry Mason and Cinderella; the teenager grappling with their changing body; the parent hoping their child will always look up to them.

Ours is a mesmerizing constellation, so vast it can’t be contained, so plentiful it can’t be denied, so brilliant it shines through the dark. 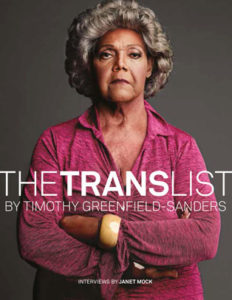