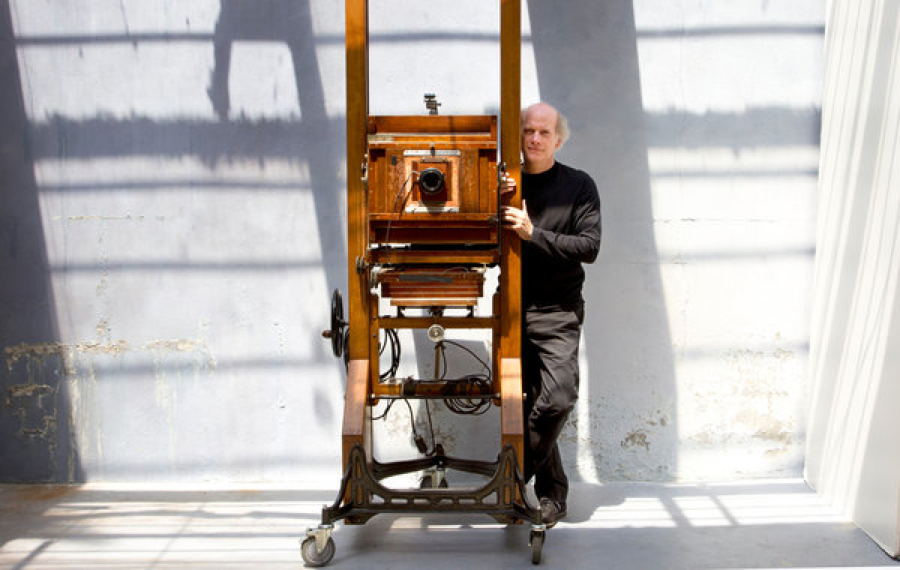 BOYISH in her gamin crop and tie, Isabella Rossellini faced down the camera. For sure, she acknowledged, aging is a bummer. “My social status has diminished because I know I’m not invited to the A parties anymore,” said Ms. Rossellini, 60. “My daughter is. As you grow older, you don’t count anymore.”

With that, she erupted into peals of laughter touched with rue, the legacy of a lifetime of highs and lows in front of the camera.

Her latest performance, captured by the photographer and filmmaker Timothy Greenfield-Sanders, offers a dose of the candor that highlights his new documentary, “About Face: The Supermodels, Then and Now.” The film, to be broadcast Monday on HBO, pokes behind the fastidiously maintained facades of some of the most celebrated beauties of the last half-century.

Jerry Hall, China Machado, Marisa Berenson and Lisa Taylor are but a handful of the runway legends who wax funny and dour by turns as they reminisce with Mr. Greenfield-Sanders, taking up the highly charged issues of racism, drug abuse, self-image and, perhaps most provocatively, the topic of age, fashion’s last and, arguably, most fearsome taboo.

The subject rivets the filmmaker, who was eager to explore, he said, “the power of beauty and fame, what that does to your ego, what it does to you when that fades.”

The project, which originated as a photo shoot for Vanity Fair, could be mined, he suspected, for something more. “These women were still out there, after all,” he said, “still togging along and trying to be somebody.” 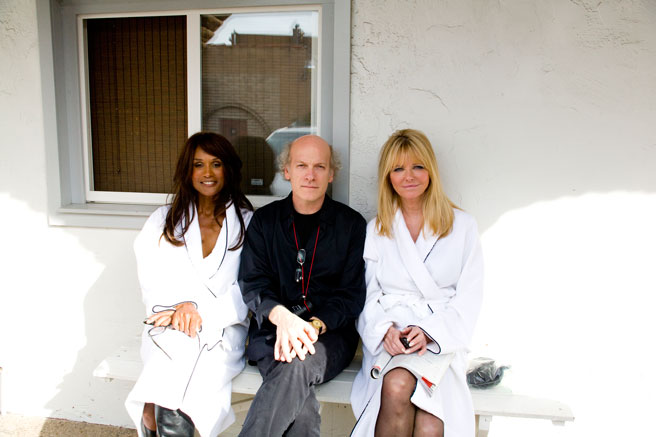 Very much like Mr. Greenfield-Sanders, who has been photographing outsize personalities in the worlds of art, literature, music and film for the better part of his 60 years. The limelight, he knows, is hard to relinquish.

“Even though you may feel that moment is gone, that you’ve been marginalized, you don’t want to give up,” he said. “You still want to be in the world, making a mark on the world.”

The documentary, shown at the Sundance Film Festival, follows several others by Mr. Greenfield-Sanders, including a Grammy-winning film about the rocker Lou Reed and, more controversially, “The Black List,” a three-part series on HBO examining the lives of accomplished African-Americans, among them Faye Wattleton, the former president of Planned Parenthood, and Vernon Jordan, the civil rights activist and presidential adviser.

His latest work will likely speak to several generations, though Sheila Nevins, the film’s producer, thinks that older women in particular “may find something special in the fact that beauty continues on some level, through either artifice or confidence.”

Ms. Nevins, the president of HBO Documentary Films, suggested that viewers’ fascination, and her own, may have its ghoulish aspects. “Beautiful women getting older, women who decay, that’s always intriguing,” she said, especially when their livelihoods have rested on their looks. “They are their own instruments. What do you do when you’re a Stradivarius and you’re losing your strings?”

If you’re practical, you might check in for a tuneup, as did the defiantly silver-haired Carmen Dell’Orefice, who is still striking poses at 81. “If you had the ceiling falling down in your living room,” Ms. Dell’Orefice challenged in the film, “would you not go and have a repair?”

Karen Bjornson, a former star for Halston, tugged un-self-consciously at her features, acknowledging that she had had an eye lift before resuming her career at 50 on the Ralph Rucci runway. “It was money well spent,” Ms. Bjornson said, “getting the product in shape again.”

The relentless self-scrutiny endemic to the trade starts at a tender age.

“Working off your looks makes you pretty much the opposite of self-confident,” said Paulina Porizkova, the Czech-born former superstar. “Still, I don’t think any 15-year-old girl will turn down the chance to be called beautiful. You don’t realize at that point that you are also going to be called ugly.”

Picked apart during castings for her teeth, or her thighs, Ms. Porizkova was terrified. “Every job felt like it was going to be my last,” she said. Propped on such flimsy scaffolding, her sense of self was compromised.

“What people called sexual harassment, we called compliments,” she said. “When a 16-year-old is flattered by a man pulling out his penis in front of her, that’s noteworthy.”

Not all of Mr. Greenfield-Sanders’s subjects were as forthcoming. He recalled that Ms. Rossellini was initially offended by “Ageless” (the working title of the film). She thought it smacked of misogyny. Beverly Johnson, the first black model to grace a Vogue cover, in 1974, had misgivings, intensified, she confided in a phone interview, when Mr. Greenfield-Sanders showed her early images. “I was like, ‘You’re going to retouch this photograph, aren’t you?’ ” she said. “ ‘We’re supermodels. You’ve got to retouch.’ ”

The filmmaker’s warts-and-all approach angered some of her peers as well, Ms. Johnson said. “We were all calling each other on the phone, asking: “Can you believe this guy? Who does he think he is?’ But after awhile, we all felt kind of comfortable in it.”

That they did is a testament to Mr. Greenfield-Sanders, whose mild-as-a-curate features and studiedly unassuming manner tend to foster trust. Like his subjects, he is aware of his own aging. “At Sundance we had to pose for these press pictures,” Ms. Johnson recalled. “I looked at him and noticed, he’s posing. He’s like the fourth model in the group, very aware of his looks.”

“Everybody is sucked into that vortex,” she added. The hairdressers, the photographers — no one is immune. “We all live in a bubble, a place like no other.”

By nature or necessity, though, the filmmaker remains mostly untouched. “There is a sweetness to his character,” Ms. Nevins said. “He laughs at himself.” Dolores Hart, who threw over a movie career in the 1960s to become a nun, was one of those who gained a sense, Ms. Nevins said, “that what’s in front of his lens is the most important thing in the world at that moment.”

Mr. Greenfield-Sanders is cannily aware of his strengths. He sat chatting in the kitchen of his home and studio, a converted rectory on the Lower East Side of Manhattan, where most of the film was shot. The rooms are hung with artworks, most prominently the large figurative canvases of his daughter Isca Greenfield-Sanders.

“I am very, very tuned into people,” he said. “If something’s wrong, I can sense it from the moment they walk in the studio.” It is a skill he picked up early. Commissioned to shoot Orson Welles, Mr. Greenfield-Sanders, then in his 20s, tried for a conversational icebreaker, asking him, “What’s your favorite film?

“I don’t play games like that,” came the snarly reply.

“What I learned is that I wasn’t there as a tourist,” Mr. Greenfield-Sanders said. “I was there to make him comfortable.”

“People will tell you their stories if you give them a chance,” he added.

Those tales can be amusing. Jerry Hall grew up in Texas, where she worked in her teens at a local Dairy Queen. Her mother made her clothes, she told the filmmaker, though not all of them. “We used to get the Frederick’s of Hollywood catalog,” she said. “All that snakeskin and satin,” she said, seemed to her the pinnacle of chic, suitably glamorous for a trip abroad. “We thought Paris was like that,” she said.

Other stories are disturbing. Lisa Taylor, perhaps best remembered for lounging, legs parted suggestively, for a Helmut Newton photograph, succumbed to the lure of cocaine. “I was so insecure that I needed to do it,” she said. “It made me feel like I had something to say, that I was worthy of being photographed, that I was somebody.”

Jade Hobson, a former fashion editor, makes a brief appearance, her comments a measure of changing times. In those days it was uncool for a model to smile. During a shoot with the photographer Francesco Scavullo and the model Gia Carangi (who died of AIDS in 1986), Ms. Hobson checked closely for stray hairs and errant threads. “I noticed track marks on Gia’s arms,” she recalled.

No one intervened. “We were certainly aware of the heavy use of drugs,” she said. “We let it go. We maybe exploited these girls because it brought a certain look to the photographs.”

Wrenching in a different way is Pat Cleveland’s account of traveling in the South in the early 1970s and being taunted for her color by local rowdies. They stormed the bus she shared with other models, rocking it until it quaked and nearly overturned, she recalls, still shaken at the memory.

In a business notoriously tough, the skin thickens. Surviving and even thriving are women like Carol Alt. At 48, Ms. Alt famously posed nude for Playboy. Now 51, she turns out tomes on nutrition, continues to model and appears in films, her latest being Woody Allen’s “To Rome With Love,” in which she plays Alec Baldwin’s lissome wife.

“There comes a point at which you are a precious commodity,” Ms. Alt said in a phone interview, “because there is nobody else like you.”

Ms. Dell’Orefice, who began her career in the 1940s, when “model” was thought to be a euphemism for prostitute, rarely goes on castings, she said. (“If they don’t know who I am by now…”) When she does appear on set, she is hardly a pillar of patience. “If they say, ‘Oh, you’re too tall, you’re not this or whatever,’ I just leave,” she said. “It’s as simple as that.