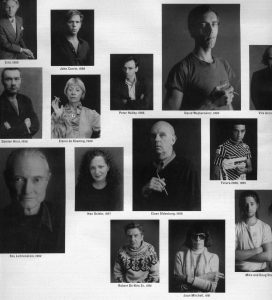 When Timothy Greenfield-Sanders was a film student in the 70’s, he got advice from some people whose pictures he snapped. ”Are you crazy, photographing me from below?” was Bette Davis’s contribution to his education. A quarter-century later, he is the photographer of choice for celebrities like Monica Lewinsky — and the celebritizer of the New York art world. Starting Oct. 29, Mary Boone’s gallery in Manhattan will be covered floor to ceiling with 700 of Greenfield-Sanders’s portraits: every picture he has taken, over 20 years, of an artist, dealer, curator, museum director or art critic (excluding this one but including the Mayor of New York).

”Timothy Greenfield-Sanders: Art World,” will also appear in book form next month. A shifting barometer of downtown taste, the photographs include Andy Warhol on one hand and, on the other, many people who fulfilled Warhol’s prediction about fame. Superstar or shooting star, everyone through Greenfield- Sanders’s lens somehow ends up looking like a Marxist revolutionary, improbably suave and preposterously serious. He has photographed dozens of artists almost at the instant they splashed on the scene (see the Starn twins and Elizabeth Peyton) — and sometimes earlier. The pictures of David Hammons (1980) and David Wojnarowicz (1983) are virtually clairvoyant. Two decades ago he started out with portraits of artists who came of age in the 50’s, and they may still be his catchiest pictures. These include Joan Mitchell, who refused to take off her glasses, and an equally brassy Elaine de Kooning, doing her best Dorothy Parker. Portraiture, like all art, is in the eye of the beholder; de Kooning told Greenfield-Sanders that the portrait looked just like her, ”aloof and demur.”