American Photo March/April 2008  The Medium Is The Message
The Photographer As Director — How the photo industry is learning to love the moving image. —

The art of still photography and the art of filmmaking have always been closely related: Think of Stanley Kubrick, whose experience as a photographer no doubt influenced his stylized films, or revolutionary photographers such as Robert Frank and William Klein who also shook things up with their experimental films. Today, however, the distinction between filmmakers and imagemakers is practically nonexistent. Rapid technology advances and exploding demand for all kinds of visual storytelling have led to a new creative hybrid — photographic artists who migrate seamlessly between the still and the moving image. In the following special section, American Photo goes behind the camera with six of these visual chameleons to uncover the secrets to their success. All of them have learned to capitalize on their multifaceted talents to help them go further in their favored field, be it hard-hitting photojournalism or beat-dropping music videos. But most important, they recognize that as the walls between mediums come down, those who can straddle the divide will be the ones still standing when the dust settles. 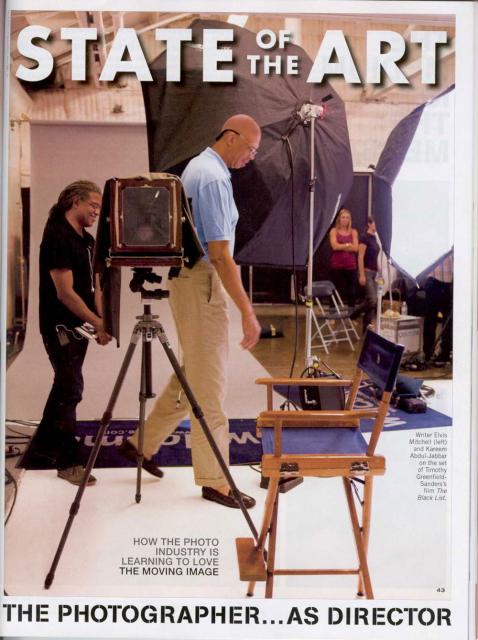 His recent documentary The Black List, which debuted in January at the Sundance Film Festival, is a collection of interviews conducted by film critic Elvis Mitchell with black Americans who have achieved renown: Nobel Prize-winning author Toni Morrison, choreographer and dancer Bill T. Jones, comedian Chris Rock, former secretary of state Colin Powell, and more. “These are people who not only are the best at what they do, but are extraordinary because of the circumstances they had to overcome to get where they are,” says Greenfield-Sanders.

As a photographer, Greenfield-Sanders has developed a simple but effective visual technique, shooting his subjects against neutral backgrounds with an 8×10 camera and lighting them from one side with a strobe in a large umbrella for diffusion. For the film, the seamless backgrounds remained the same, while the strobe was replaced by an $8,000 daylight-balanced continuous light called the Joker, diffused with an Elinchrom Octabank.

Next Greenfield-Sanders struggled to duplicate the way subjects in his photographs gaze directly into his 8×10 camera’s lens. “For the film, of course, they were being interviewed as we shot them, so we had to find a way to get them to look into the camera, not at the interviewer,” he says.

The solution was a type of teleprompter called the Inquisitor, made by Toby Barraud and Stefan Springman. The device was placed directly in front of Greenfield-Sanders’s digital video cameras: two Panasonic AG-HVX200 cameras — one for closeups, the other for three-quarter compositions — recording straight to Panasonic P2 cards, not to tape. The subjects would look at the teleprompter and see the face of Mitchell, who was actually sitting in another room. From the other side, of course, the teleprompter appeared as transparent as glass. Thus, as the subjects talked to Mitchell, they were actually gazing directly into Greenfield-Sanders’s video cameras. The effect is thrillingly original, melding the iconographic power of Greenfield-Sanders’s photos with the narrative of his films.