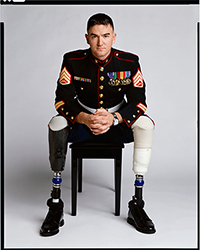 Introduction by Peter Halley, Artist
For over forty years, Timothy Greenfield-Sanders has pursued a single project with remarkable intensity. Through portrait photography and video documentaries, he has, with ceaseless energy and obsessive dedication, chronicled the people of his time. The magisterial scope of his project is equal to the vast chronicles assembled by Atget and Warhol. Greenfield-Sanders’ sensibility is austere, ascetic, elegant. Cool mastery of craft is central to his work. He records his subjects with a minimum of affect. His work is never settled. It embraces both the stark objectivity of the police mug-shot and the idealizing beauty of the Roman portrait bust. Greenfield-Sanders’ projects are radically inclusive. He has documented an enormous variety of people, young and old, renowned and obscure, privileged and marginal, friends and strangers. But it is also intently exclusive. He exclusively chronicles people who are doing things—artists, writers, musicians, politicians, activists, business people, and porn stars. His work speaks to an almost scriptural command: life, to be lived fully, must be given over to the need to express, create, invent, or lead.

Friendly, convivial, and engaging, Timothy Greenfield-Sanders
has put you at ease and taken  “the”photo before you can have a chance to get nervous.
He makes a necessary but unpleasant task a fun experience.
Patricia Cronin, Artist

Dignity, democracy. Those are the two words that come to mind
when I think of the work of Timothy Greenfield-Sanders.
Its formal consistency creates among the most dignified portraits of our time.
Deborah Kass, Artist

Timothy’s success as a portrait artist is derived from his technical mastery,
knowledge of art history, and his singular ability to engage his subjects.
Tatijana Shoan, Editor-In-Chief, AS IF Magazine

Timothy is a master at capturing the truth,
whether in his portraiture or documentary work.
The only thing better than sitting in front of his camera
is working with him – and loving him – behind it.
Janet Mock, Bestselling Author, Producer, and Director, and collaborator on HBO’s The Trans List.

In his “Lists” pitcturing the greats, he shows us an American collective,“We.”
The optimistic, creative, inclusive, and achieving “We.”
If you know the artist, you know this is a description of brilliant, sunny Tim himself.
Deborah Kass, Artist

What inspired or motivated you into your career initially?
In my mid-teens, I discovered the music of The Velvet Under- ground and the lyrics of Lou Reed. Andy Warhol had designed the now legendary ‘banana’ cover for the Velvet’s album. I remember being fascinated by the sleeve photos and that led to an interest in Warhol himself, the Factory, and types of under- ground films that he and his superstars were making. I quickly bought a Super 8 camera! For a kid from South Florida, the New York scene certainly had greater appeal than Coconut Grove. A decade later, many of the Warhol superstars sat for my large-format camera.

Why portraiture?
Portraiture actually came later. It was counterculture filmmak- ing and documentary-style shooting that intrigued me. Aside from Warhol’s film work, Jack Smith really impressed me. A few years later, while studying art history at Columbia Uni- versity, I met Jack through a Warhol friend, Tally Brown, and assisted him on some projects. Working with Jack helped me to see things in a different way.

You mentioned in our phone conversation that you remember everything. Do you see it as a curse in some ways because of all of the people you interact with? What do you think contrib- utes to your ability to remember these details so clearly?
I don’t remember saying that! Okay, I’d say that I once had a great memory but now I wish I’d written down more of the details. My advice to readers: Write it all down. Memory is quicksand.

How would you describe your work philosophy?
As usual, Lou Reed said it best in his song “Work” from Songs for Dreila, his masterwork about Warhol. Andy was a Catholic, the ethic ran through his bones/ He lived alone with his mother, collecting gossip and toys/ Every Sun- day when he went to church/ He’d kneel in his pew and say, “It’s just work, all that matters is work.”/ Andy was a lot of things, what I remember most/ He’d say, “I’ve got to bring home the bacon, someone’s got to bring home the roast.”/ He’d get to the factory early/ If I’d ask him he’d tell you straight out/ It’s just work, the most important thing is work/ No mat- ter what I did it never seemed enough/ He said I was lazy, I said I was young/ He said, “How many songs did you write?”/ I’d written zero, I lied and said, “Ten.”/ “You won’t be young forever/ You should have written fifteen”/ It’s work, the most important thing is work/ It’s work,…

Who is or was your greatest mentor?
At the American Film Institute, I met, separately, Alfred Hitch- cock and Bette Davis. Both of them saw something in me, gave me tough advice, guidance and probably, most importantly, confidence. They saw my talent as a photographer before I did. I’ll always be indebted to them.

Lou Reed is certainly another, but different. Not really a mentor, per se. By the time I finished Lou Reed: Rock and Roll Heart, the doc on Lou’s life, we were very close friends. Lou was one of those rare people, that if you are lucky, you get to know well. He was monumentally talented and creative. I miss him every day.

What is your most difficult challenge that you’ve had to overcome professionally?
My lack of humor.

What would be your dream assignment?
I don’t think about dream assignments. I generate my own work based on what interests me. I make films, find the fi- nancing, direct, produce and photograph the subjects. Certain- ly, back when editorial was king, it was fun to photograph the President at the White House or some celebrity, but that world is long gone for me.

Who have been some of your favorite people or clients you have worked with thus far?
I don’t define myself by my commercial work. I was happy to have it but it was a means to an end. Museum exhibitions, gallery shows, filmmaking—those are primary for me.

What are the most important ingredients you require from a client to do successful work?
75% payment before the job starts.

What is your greatest professional achievement?
I’m proud of my films, my work as a photographer. If I had to narrow it down, I’d probably pick my exhibition of 50 over- sized images from “The Black List” series at the National Portrait Gallery in Washington, D.C. in 2014. My recent exhibition at the Annenberg Space for Photography wasn’t chopped liver, either, as they say.

What is the greatest satisfaction you get from your work?
I still enjoy what I do. Each time I shoot a portrait, I learn a little something new. I get better. That’s a good feeling.

What part of your work do you find most demanding?
Answering Q & A profiles.

What professional goals do you still have for yourself?
EGOT. I have the Grammy so far!

What advice do you have for photography and film students starting out today?
Don’t try to prove you can do everything as a photographer… still life, landscapes, portraits, etc. You can’t. Find one area you really love.

What interests do you have outside of your work?
Testing sphygmomanometers. Great fun.

What do you value most in your career?  In your life?
Sounds so corny but my family and friends. Uh, just typing these words is so icky.

What would you change if you had to do it all over again?
My name. It’s so fucking long!

Where do you seek inspiration?
From the kids of Marjory Stoneman Douglas school who are fighting for gun control.

How do you define success?
I don’t know…how’s this? Suc·cess, noun 1. The accomplishment of an aim or purpose. “The president had some success in restoring confidence.” Synonyms: favorable outcome, successfulness, successful result, triumph; Hollywood ending. “The success of the scheme.”
The attainment of popularity or profit. “The success of his play.” Synonyms: prosperity, affluence, wealth, riches, opu- lence. “The trappings of success” A person or thing that achieves desired aims or attains pros- perity. “I must make a success of my business.” Synonyms: triumph, bestseller, blockbuster, sellout.

What’s on the horizon for you?
Directing and producing, “American Masters: Toni Morrison” for PBS. Toni first sat for me in 1981 and we have remained friends these 37 years. I’m honored to make a film about her spectacular life. There is no one like her!

How would you like to look back on your career?
With regret that I didn’t work harder!

I STILL ENJOY WHAT I DO. EACH TIME I SHOOT A PORTRAIT, I LEARN A LITTLE SOMETHING NEW. I GET BETTER. THAT’S A GOOD FEELING. Timothy Greenfield-Sanders