From rock stars to presidents, literary figures to actors, not to mention pretty much everyone of consequence in the blue-chip art world, Timothy Greenfield-Sanders has for some three decades now photographed celebrities, in the process institutionalizing himself as one. Ever a fan of the big negative’s capacity for crisply rendering minutiae larger than life, Greenfield-Sanders has made a formidable career out of satisfying the public’s desire to scrutinize ordinary aspects of extraordinary people, at once acknowledging and confirming their iconic status.

He has captured, for instance, the young David Bowie, transformed with a goatee and feathery earring; Warhol wringing his hands, for once caught unawares by the camera; Hillary Clinton with that impeccable blonde bob; Agnes Martin in an adorable black cardigan, gold buttons done up to the top; Robert Mapplethorpe wide-eyed in his boodle. Like school portraits, set consistently against solid backdrops, Greenfield-Sanders’s portraits possess a reassuring sameness, encouraging scientific scrutiny–all the while bestowing on his sitters a cultural legitimacy of which they cannot help but be aware. 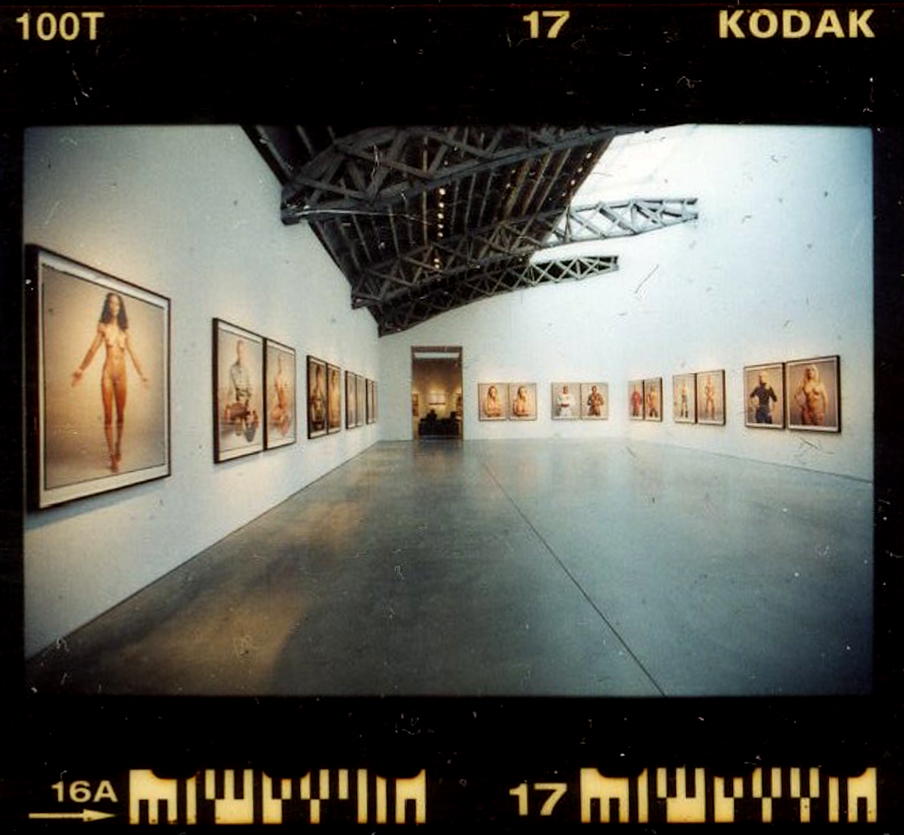 Accordingly, Greenfield-Sanders saw to it that, in the naked portraits–especially of the women–the stars were done up as on-screen. Flip-flops turn into stilettos; pigtails into coiffed, cascading locks; bare faces get covered with unfortunately garish makeup. Thanks to the size and clarity of the prints, hair follicles, wrinkles, freckles and makeup are visible in each image, lending an air of humanity to these frequently plastic-looking people. Richard Avedon’s comparably detailed “In the American West” project comes to mind as a precedent. (Instead of his usual fashion models, for a time he shot detail-driven portraits of miners, drifters, beekeepers, slaughterhouse workers and white-trash teens, offering up for scrutiny these unseen, uncelebrated factions of America’s rural poor.)

Greenfield-Sanders’s subjects accessorize themselves both clothed and nude, and it’s the accoutrements that help us piece together some idea of who these people might be and how they live–a more nuanced endeavor, perhaps, than gawking at genitalia. A number of the women, for example, flash sizable, real-looking diamond rings, pointing up prosperity and perhaps even domestic stability. Dressed, many of both sexes wear comfy sweats, looking rather like people we might run into at the grocery store. Indeed, with their clothes on, several of the stars appear to be soccer morns, girls-next-door or commonplace Chelsea homosexuals. Each truly does blossom, however, in the nude.

Another thing Greenfield-Sanders did for “XXX,” aside from physically making the photographs, was to round up a choice range of commentators who muse about everything from their own lives to the nature of sexuality and sometimes even proffer near-nonsense. Wayne Koestenbaum spun his invitation to contribute into an opportunity to have lunch at Chelsea’s Food Bar with Michael Lucas, the aforementioned square-jawed Russian, whose credits include a film called Fire Island Cruising; Michael, it turns out, ordered the “Chelsea Boy Special”: egg whites with spinach and chicken breast, then doused it all with ketchup. (After all, we need to know these things.)